So I finally resurrected my hurricane-interrupted plans to go to Six Flags New England (a theme park in Agawam, MA, about 100 miles from Boston, near the MA/CT border). This time I recruited not one, but 3 other au pairs into my little trip – Maria, from Sweden; Feli, from Germany; and Chrissy from Austria – quite the mixed bag (or car).

Our plan was originally to take Chrissy’s car, but the night before her host parents realized that it needed an oil change, so thankfully my host parents agreed to me taking on their cars. We finally got on the road about 8:30 – after turning back to pick up Chrissy’s GPS (thank goodness!) and finding a gas station to fill up (and then subsequently spending 5 minutes looking for the button to open the gas tank)! The drive was a fairly easy one and we got there about 10:10am when the parking lot was still pretty empty!

Chrissy, me, Feli & Maria at the entrace of Six Flags!

Luckily we’d decided to go on a day where they had this special “picnic day” on, where you could get entry to the park for $42, including a ‘picnic’ (read: hot dogs and hamburgers) lunch included, which we thought was a great deal!

The cool thing about Six Flags is that it has LOTS of big coasters! Most theme parks only have one or two coasters, but this park has 10 coasters, which is a little exciting. For those of you that knew me when I was in the US last year, or who have read back through my blogs, you might remember that I only just rode my first ‘real’ rollercoaster at the Harry Potter theme park back in October last year, so my fear is still there of these big, crazy steel structures that toss you around.

We started with a wooden coaster (the kind that are probably the MOST unsafe, haha, and that I am always told by one of my nearest and dearest NOT to go on, for my own safety) which we came off alive. We then decided to dive in head first, and ride the Scream, which is one of those crazy “drop” rides that lifts you 20 stories up in the air and then drops you so fast that you feel like your insides are all going to come out! I’m pretty sure I held my breath for the first 15 stories of the drop, it was pretty scary!

About to ride "Scream"

After that we went on a few more tame rides, and then decided to go on the “Gotham City Gauntlet”, which is a jazzed up version of the Wild Mouse that they have at Luna Park in Sydney (and possibly Melbourne). The four of us got in our little car, and went up the hill to the top. Just before we got onto the flat bit at the top, our cart stopped. And stayed stopped. And then they announced that they were having some slight “technical difficulties” and were calling maintenance. Just what we wanted to hear when we were still on the hill heading towards the top. We sat there, half freaking out, half laughing for about 10 minutes, occasionally yelling “let us down”. I tweeted that I was stuck at the top of the rollercoaster. We were all grateful that we were stuck at the top of one that we a) weren’t upside down in, and b) had a set of steps right next to us all the way to the bottom, in case we needed to be rescued!

After that little experience Maria was struck down with really bad stomach cramps, so we sat with her for a while, and while I went off to get her some water, a security guard came over to the girls, and then called for first aid. Now, I hate to laugh, but it’s quite funny watching a girl with a quite strong Swedish accent try to explain to two male EMTs that she’s fine, that she just has really bad menstrual cramps, that she just needs to lie down. They were there asking us if we wanted to call her an ambulance to take her to the hospital. Thankfully after the wheelchaired her up to the First Aid room and I went and bought her some Naprogesic (or whatever the equivalent is called here – Alleve maybe?), I explained to a woman in the first aid room, and they let her lie down in one of their beds.

We felt bad leaving her, but she didn’t want to ruin our day and insisted that we went off and rode some more rides and not stay with her while she slept.

So after that, we decided to tackle our first “big” rollercoaster – one called the Mind Eraser, which is one of the ones that you sit in and the carriage hangs under the track, which are my favourite. Those first few loops and so scary, but when it’s over (and your equilibrium has rebalanced and you don’t feel dizzy any more) you want to ride it again straight away. Unfortunately the line was too long, and it was already 1:00 and our “free” lunch only went from 12:30-1:30.

Chrissy and I enjoying our lunch!

So we headed over to the picnic area, and I must admit for the small price we paid, the lunch was decent. They had buffet style hamburgers, hotdogs, salads and chips. There was a soda machine (I chugged 3 cups of pink lemonade in my dehydrated state) and also ice creams for dessert. We ate and rested, and then went to rescue Maria from the first aid room, since she was feeling a LOT better.

Chrissy rode the “Catapult” on her own – I couldn’t handle the thought of just going around and around and around. Brave girl. Then we headed to the Flashback, which is the pretty much exact same rollercoaster that the “Demon” at Sydney’s Wonderland was (same manufacturer etc.), except the G-force is 5G’s, whereas the Demon’s was 4G’s! Feli was out by this time, so it was only Chrissy and I, the hardcore rollercoaster-er’s riding, and since there was no line we rode twice in a row! Talk about spinning heads and shaking legs after getting off that one! 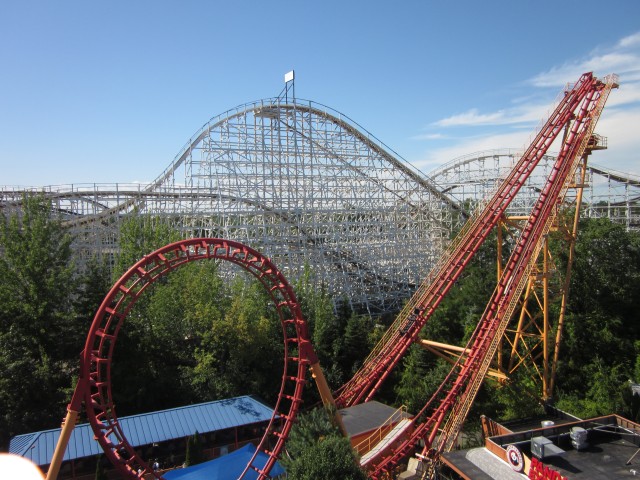 After that we headed back over to the other side to ride the Batman rollercoaster (again, just Chrissy and I). It was then that we saw that the Superman “Bizarro” coaster (which is more than 20 stories high at its highest point, and has a drop of about 75m) was finally reopened (it closed shortly after we got there), but we only had about 20 minutes left before we needed to leave, and the wait was about half an hour, so we opted out.

Chrissy and I decided that for $25 we would upgrade our daily tickets to a season pass (which means we can get in for the rest of September and October if we want to, but more importantly, for the whole 2012 season from May through October!) for free, so we did it. Super exciting to know that I will be going back next summer! 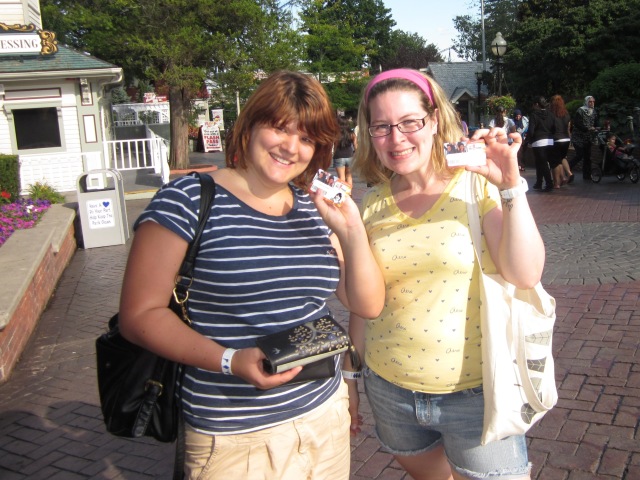 We started our adventure home, with the biggest hurdle still to come. We pulled into a Maccas (McDonalds, for all you American’s playing along at home) and got drinks (the first time I’ve EVER ordered a large ANYTHING in this country) and then kept driving back towards Boston on the Masspike. About 10 miles from the intersection of the Masspike and I-95, where we wanted to turn to head towards home, the cars warning light came on, and there was a loud beep. Car overheat. OH NO. So I turn on the hazard lights, turn on my blinker and go to pull over on the shoulder. There was a cop already there, who had pulled over another car, and so we pulled up a little way in front of them and turned the car off.

The cop drove up behind me, lights going, and all the girls freaked out! I told them to be calm, and the cop came over to the passengers window and asked what was going on, when I proceeded to tell him that “the warning light had come on, and the temperature gauge is right on the ‘hot side’.” “On the hot side, eh?” he laughed at me, and then asked why I talked funny, so it was pretty funny! So we waited awhile, stopped Maria from peeing on the side of the road [Chrissy had a story about a nanny who spent a night in jail for letting the child she was looking after pee on the side of the road!], then after getting some instructions from my host dad (let it cool down, and then turn the heater on high [to suck the hot air out of the engine], put the back windows down, and drive at ‘slow highway speed’ [55mph]) we set off again, laughing away. Feli and Maria were in the back of the car putting sweaters on because they were freezing flying down the highway at 55mph/85kmph with the windows down – meanwhile Chrissy and I were sweltering in the front because we had the heater on high. LoL.

My attempt at a "grumpy cos the car is broken" face! LoL!

So THANKFULLY we made it home safely, without blowing up the car (and my host dad even attempted to come rescue us, but we were fine and got home and so he ended up just following him home), with 20 minutes to spare before my host parents left to go out to a party!

Such a crazy fun day – and so nice to be able to laugh at the dramas instead of stressing out (although I may have screamed a few loud words after getting off the phone to my host dad about the car, along the lines of “WHY DID THIS HAPPEN TO ME!!!!!!!!!!!!!!!!!!!”) A theme park trip with no vommiting involved is ALWAYS a success – so I’d call this a definite success!

This is how I felt in general about Six Flags - YAY!