Coming Face to Face with Magic [an evening with Jodi Picoult]

As some of you reading this will know, I love to read. My mom always tells me stories of how, as a young child, I would sit on the potty with a newspaper. Between the ages of 8 and 13, I would religiously clean out the local library of their ‘tween’ books, sometimes taking home 15 or 20 Babysitters Club and Sweet Valley High books, and spend the weekends curled up in bed or in a chair reading to my heart’s content. My grandparents lived (and still do, 20 years later) next door to a secondhand bookstore, where I would spend my hard-earned money buying more books, and sometimes I would even convince Wally, the man who owned it, to lend books to me.

As a young adult, I would get my hands on a book, whether through a recommendation from a friend, or just the general look of a book, and then quickly devour it, going on a search for more books from the same author if I enjoyed it. And so, it was this way, that I discovered the amazing literary works of Jodi Picoult.

I remember my discovery of Jodi Picoult very clearly – I was eating breakfast at a friend’s place on a weekend morning (homemade Bacon & Egg Muffins) and read the review of ‘My Sisters Keeper’ in the newspaper. It intrigued me, and I quickly got my hands on a copy.

And, the love affair continued from there. I loved the real-life qualities of the story, and more importantly, the legal/court aspect, that has always fascinated me. And so, when I finished My Sisters Keeper, I kept reading – The Pact, Salem Falls, Vanishing Acts. Every year a new book would be published, and every year I’d buy it within days of it being on store shelves, and not put it down until I was finished.

So (yes, sorry, I’m getting there), when Picoult announced the dates for her US Book Tour for her upcoming book “Lone Wolf”, I was very excited to see that there were not 1, but 3 Boston stops on her tour, and so I organized to go to one last week.

I’ve only ever been to one other book event – when I was in New York City 18 months ago, Hilary Duff did a signing of her first book, and I went along. The line was huge, and snaked through the shelves of the NYC bookstore. You had to purchase your book from that store (and show the receipt so you could get your book signed) and Hilary didn’t really say anything, other than “thanks for buying my book”, before she proceeded to sign for the hundreds of teenagers and young adults, who were probably more interested in meeting her than in what she had written.

So when I headed to the Jodi Picoult event in Framingham, I was expecting it to be something of the same. I’d rung the Barnes & Noble store that was hosting it a few days earlier to suss it out, and all they could tell me was that it was at the Middle School Auditorium, that books would be sold there, and to get there early (the starting time was 7pm).

I dragged my friend Maria along for company. We got stuck in traffic, even though we decided NOT to take the Mass Pike (which may have been our demise) and after traversing multiple creepy back-roads through what seems like haunted woods, we finally arrived at the school at 6:58pm. So much for early.

But, I was surprised at the organization of the thing. I had never put 2 and 2 together and realized that ‘auditorium’ meant seats. In my head I had pictured a snaking line through a school hall of hundreds and hundreds of people, so it was surprising to arrive and see that not only were the books 25% off the cover price, but that it was well organized, and that after picking up a book, you could SIT in the auditorium. And there was a stage. With a lectern. And that OMG maybe she was going to speak.

The thing I love about Jodi Picoult is that she will be the first to say that she is just a ‘normal person’ like you and I. I mean, if you consider a normal person someone who has 14 million books in print worldwide, and has had not one, but two books debut at number 1 on the New York Times bestseller list. She’s a 45-year old mom, a ‘curly girl’ and an advocate for gay rights. And she writes amazing books.

She took to the stage slightly after 7pm, and spoke about the book. She spoke about the research she did for the book, spending time in the UK with a man who spent a year living in the wild with wolves. She touched slightly on the medical research she did here in Boston on life support and the other issues touched on in the book. And then, SHE READ.

She read, from ‘Lone Wolf’ in the voice of one of the characters. To read a book is one thing, but to be able to sit and listen, to the voice of the person that penned those words, is totally something else. I sat there, captivated, and groaned when it was over. Maria was so captivated (by an author that she had never heard of, let alone read) that once the speaking part was over and people were lining up to get their books signed, she slipped out and bought a copy of ‘Lone Wolf’.

And that wasn’t it. After the reading, she explained a little more about what she had learnt of wolves in her research, and invited 3 audience members onto the stage to learn to howl with her. The audience howled also, with laughter.

It’s amazing how something as seemingly insignificant as a book can bring joy to so many people. I was lucky enough to get to ask a question of Jodi, in the Q&A time, and it was great to hear her answer something I had been wondering about her writing for a few years. (I must say here, that when I approached the microphone, after I opened my mouth and say “My question is…”, my mind, in a very un-Cyndi fashion, went blank, and it felt like hours that I was standing there with my mouth slightly open, willing the question to hurry back into my mind!!!)

And then, finally, after waiting 45 minutes for people to file from their rows of seats in the auditorium to the table up the front, it was our turn to get our books signed, and come face to face behind the magic, the brains behind all the wonderful books that I have spent hours of my life reading and rereading. And she was lovely, and friendly, and approachable. And I am so glad that I was able to have that experience.

And that is how, and why, I am sitting here on a Saturday morning, attempting to work on a uni assignment (that has obviously been thwarted by me finally having the urge to write this blog post), torn between doing the work that I NEED to do, and diving back into page 78, where I last left off in “Lone Wolf”, because that’s what I WANT to be doing! 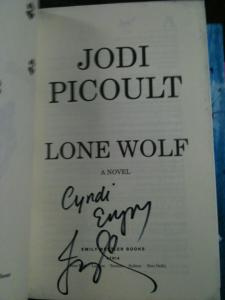